In certain terms, three audiences are involved with these images: the first is the photographer, Markus. The second is the person viewing the photograph, you and I. And the third audience would be the people implied and described but never seen in these images: the factory worker who left an interior light on, or perhaps the policeman who abandoned his car, leaving it askew and walking away. Or maybe it’s the warehouse manager who abandoned his desk chair on an outdoor terrace, the scene empty underneath a strange starry sky. These scenes of construction, commerce, and leisure remain exactly as they were when everyone departed for the day. Or was it years ago? The body of work seen under this pretense then becomes a series of open questions that lead to the notion of the inhabitants of these spaces being elsewhere. It is for this reason that we are made aware of the wonder and perceived function of man’s places and inventions. 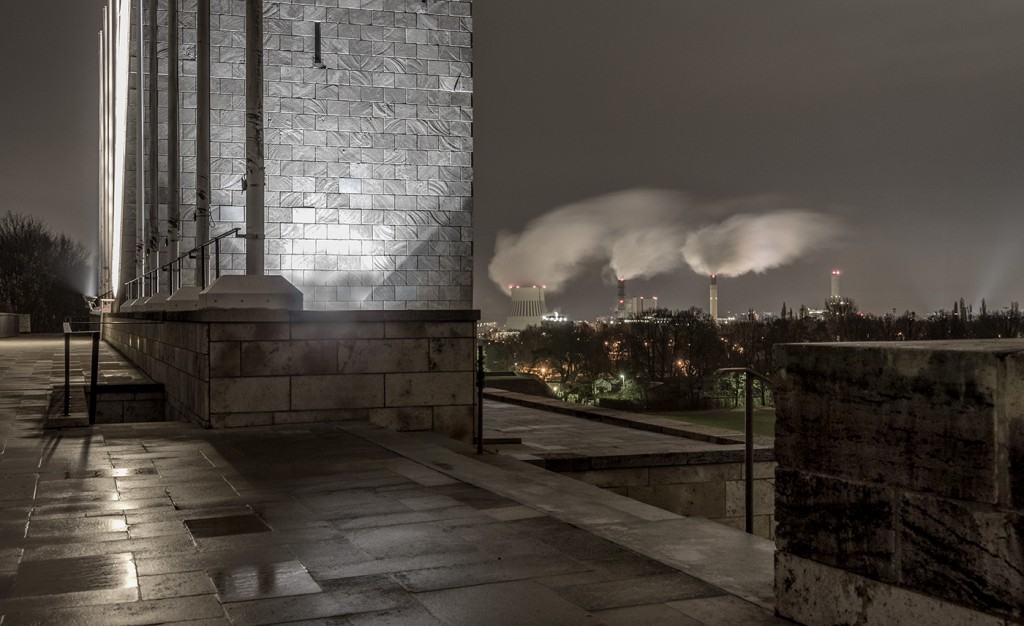 Conceptually, this work deals with the effect of place and time. True enough, these are singular photographs of specific locations in Berlin. However, these photographs transcend time in two unique ways. The first is these images are intentionally timeless to any place. They depict no specific era. They do not mimic anything that has come before. They are familiar yet not specifically recognized. Such an effect is achieved through an additive layering of historical artifacts, architecture, and functional aspects of the places being photographed. In a city rich with drama and history, it would not be difficult to deviate into sentimentality or ring the bell of melodrama as a direct way to pay homage to its history and people. Pain, destruction, and transformation have been an endless cycle here for the last one hundred years. If you are knowledgeable enough to know, anywhere you stand in Berlin could expose some kind of historical story. The nod to historical presence is a large part of Markus’ experience while he photographs. In many of his images, we are seeing a compilation of histories in one scene (page 79): the cropped section of the prominent Berlin Olympic bell tower built in 1937. It miraculously survived World War II and escaped destruction while its bell served as a target for military artillery practice. Here it is almost unrecognizable in the historic sense. It is rendered as a spotlighted obelisk, a stone tribute to something that has long passed. Contrast that with the most modern of power plants, newly erected, and filling the lunar-like sky with plumes of steam and light in the distance. Old and new come together.

Another example is the image of Glienicker Brücke, also known as the “Spy Bridge.” On top of this bridge was where the Soviet Union and the Western powers most visibly stood face to face in conflict. Stories of the real spy swaps and deals have become the inspiration for countless movies. But we are not shown the obvious identifiable depiction of that story. We are shown the underside of the bridge. This one is actually the fourth of such structures at this site. As with many of Markus’ images, we are faced with a choice in pathways or directions. On the right side of the image, we are invited into blackness—a field of emptiness beyond the river and far tree line. It is a subtle contrast and an alternate glimpse of what our world would look like if man did not create things. To the left the lights are revealed of the ancient city of Potsdam and residential structures comprising a collection of architectural eras colliding with historical places. The site depicts multiple bridges, civilization beyond, and the shrouded stories of recent and past histories. Archaeology is fully exposed and in view.